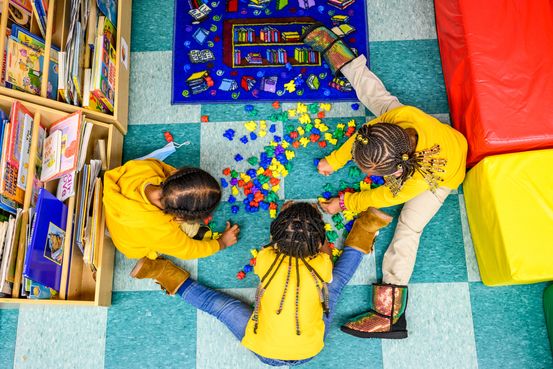 WASHINGTON—The Biden administration says its plan to expand access to preschool and affordable child care will help bolster long-term economic growth by making it easier for parents, and especially women, to work.

President Biden proposes spending $225 billion over 10 years to subsidize child care, including by capping costs for low- and moderate-income families, boosting pay and training for child-care workers and providing federal dollars for care centers. He also wants to spend $200 billion over a decade to establish a national preschool program for all 3- and 4-year-olds in partnership with states.

“Investment in early childhood care can be an important determinant of labor-force participation—one of the drivers of economic growth,” Treasury Secretary

While bipartisan support has grown in recent years for increasing federal investments in young children, disagreements remain over the best way to direct new spending.

Congressional Republicans and some economists cite research showing that while such programs do boost labor-force participation, they don’t always produce better outcomes for children. And some GOP lawmakers say if the federal government wants to subsidize child care, they would rather let households decide whether to provide that care inside or outside the home.

“We can’t just look at this through a technocratic lens of costs and benefits,” said

director of poverty and welfare policy at the Niskanen Center, a libertarian think tank. “We also need to take into account the plurality of lifestyles and preferences that American families have.”

A wave of women entering the workforce helped propel U.S. economic growth in the latter part of the 20th century. Since 2000, however, women’s labor-force participation has fallen behind other developed nations, which some economists attribute in part to more extensive paid leave and child-care policies in those countries.

The president’s proposals would help reverse that trend, said

a member of Mr. Biden’s Council of Economic Advisers.

They would provide an immediate benefit by increasing labor-force participation among parents, boosting the economy’s growth capacity and better matching employees’ skills with jobs, she said.

After the city of Washington, D.C., implemented full-day, universal preschool in 2009, the program increased women’s labor-force participation by 10 percentage points, according to a 2018 report from the Center for American Progress, a liberal think tank.

What do you think is the best way to support American families? Join the conversation below.

A March report from the National Women’s Law Center and researchers at Columbia University found access to affordable child care would raise the number of prime-age working women with young children by an estimated 17% and increase average lifetime earnings for women with two children by $94,000.

Mr. Biden has made child care and early education a centerpiece of his plan to boost productivity and economic growth, which includes $1.8 trillion in new spending and tax cuts over the next decade on measures such as paid family leave.

Moody’s Analytics estimates Mr. Biden’s American Families Plan would increase U.S. gross domestic product by $100 billion and boost payroll employment by 840,000 over the next decade, in large part by making it easier for parents to work. The White House estimates its universal preschool plan would serve five million children and save the average family $13,000 over two years in child-care costs, and its plan to subsidize child-care costs would serve three million children and allow one million parents to enter the workforce.

of Missouri, have pushed instead to give more cash to families with young children to help support parents who choose to stay home or have a relative or neighbor care for their children.

“It does seem like the administration strongly prefers getting kids out of the home and getting both parents into the workforce,” Mr. Romney said at a May 18 Senate hearing.

Mr. Biden’s plan also aims to give more cash to families by extending an expanded version of the child tax credit through 2025.

A special newsletter inspired by WSJ’s Women In series, with good reads, inspiring ideas and opportunities to connect with other women business leaders.

Ms. Boushey of the Council of Economic Advisers said the Biden plan seeks to correct what she called a market failure: The high cost of child care usually falls on parents when they are least able to afford it, early in their careers when they have sparse savings and less access to credit.

“If I need a service in order to go to work but the costs are too high at that moment in my career, this is exactly when you want government to step in and help smooth out those costs,” she said.

Among the 37 advanced economies in the Organization for Economic Cooperation and Development, the U.S. ranked 35th for spending on early education and child care as a share of gross domestic product in 2019. That is one reason U.S. women’s labor-force participation has fallen behind other advanced economies in recent decades, Cornell University economists

wrote in a 2013 paper, though they noted that American women are more likely to work full-time and in management or professional roles than women in other countries.

The Niskanen Center’s Mr. Hammond and other conservatives counter that such policies come with trade-offs, and they argue the data on larger preschool and child-care programs is mixed.

A 2015 study found that while universal child care in Quebec boosted women’s labor-force participation, it also led to worse outcomes for children later in life in terms of health, life satisfaction and crime rates.

After England expanded free preschool to 3-year-olds for up to 15 hours a week, some 12,000 more mothers with young children joined the labor force, an increase of less than 10%, according to a 2014 study by researchers at the Institute for Fiscal Studies, a London think tank, and the University of Sussex in England.

The study suggested the program—which cost the equivalent of about $990 million a year to administer—prompted many parents who were already working to move their children from other early-education settings to the free programs, said

an economist at the Cato Institute, a libertarian think tank in Washington

“The direction is pretty clear—it did bring more mothers into work, but that came at a very high cost,” he said.