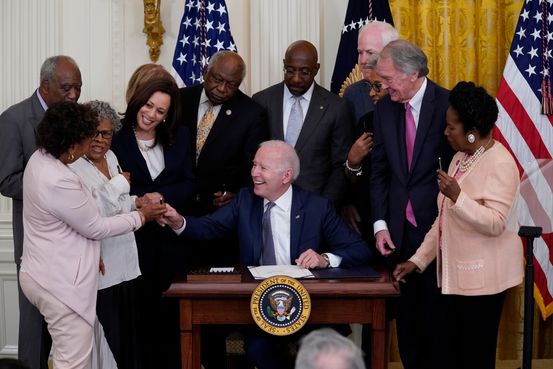 signed a bill Thursday making Juneteenth a national holiday commemorating the end of slavery in the U.S., calling it a day to remember the “moral stain, the terrible toll that slavery took on the country.”

The holiday was set to take effect immediately. The U.S. Office of Personnel Management said on Twitter Thursday that because the 19th falls on a Saturday this year, “most federal employees will observe the holiday tomorrow, June 18th.”

This is the first new federal holiday created by Congress in nearly four decades. The bill passed the Senate unanimously on Tuesday and was approved 415-14 in the House Wednesday.

“Great nations don’t ignore their most painful moments,” Mr. Biden said during a signing ceremony in the East Room of the White House, surrounded by lawmakers and guests, including Opal Lee, a Texas activist who campaigned to make Juneteenth a national holiday. “Great nations don’t walk away. We come to terms with the mistakes we made. And remembering those moments, we begin to heal and grow stronger.”

“
‘This is an important step for America.’
”

Juneteenth—also known as Emancipation Day, Black Independence Day and Jubilee Day—marks the 1865 date when Maj. Gen. Gordon Granger arrived with federal troops in Galveston, Texas, and issued an order freeing the nation’s last slaves. This came more than two months after the end of the Civil War and about 2½ years after President

had issued the Emancipation Proclamation freeing slaves in the Confederacy.

The ratification of the 13th Amendment to the U.S. Constitution in December 1865 abolished slavery throughout the country.

Mr. Biden said there was still work ahead to combat racial discrimination, stressing his efforts to provide equal access to housing programs and educational opportunities. He also used the ceremony to criticize voting laws passed by Republican-dominated state legislatures, which Democrats say aim to prevent Democratic and minority-group voters from casting ballots. Republicans say they are aimed at improving election security and faith in the voting system.

Earlier in the day, lawmakers gathered at a ceremony where House Speaker

(D., Calif.) praised the Congressional Black Caucus for their work to pass the legislation, saying: “One of the most momentous events in our history finally takes its official place of honor in our nation.”

(D., S.C.) thanked colleagues for “a tremendous effort” that he said had taken more than a century and a half. Attendees at the event later sang “Lift Every Voice and Sing,” a hymn often referred to as the Black national anthem.

The last time Congress created a federal holiday was in 1983, when lawmakers designated the third Monday in January as Martin Luther King Jr. Day, in honor of the slain civil-rights leader. Juneteenth will have the same status as Memorial Day, Veterans Day, Thanksgiving and other federal holidays.

(R., Wis.), who single-handedly blocked an attempt to fast-track the bill in the Senate. Mr. Johnson said at the time that a bill to create a paid holiday for 2 million federal employees shouldn’t pass without debate or amendments. This year, he said that he still thought it was strange for federal employees to get paid time off to celebrate the end of slavery but that he wouldn’t stand in its way. The bill passed the Senate by unanimous consent on Tuesday, a few hours after Mr. Johnson lifted his objection.

(R., Texas), the lead Republican sponsor of the Juneteenth bill in the Senate, said in an interview that he wasn’t surprised Congress acted quickly once Mr. Johnson yielded.

“There’s nothing more powerful than an idea whose time has come,” said Mr. Cornyn, who attended the White House event. “And I just think the reaction of members of Congress—at least speaking for myself—is we need this. We need this gesture of racial reconciliation.”

In 1980, Texas became the first state to make Juneteenth a holiday. Some employers also have started to observe Juneteenth as a company holiday. It is commonly celebrated through family gatherings and events such as parades and public readings of the Emancipation Proclamation.

The holiday took on additional significance for many in 2020 after

a Black man, was killed by a white police officer in Minneapolis. Mr. Floyd’s death sparked a national conversation over racism and police violence, with protests and marches held on Juneteenth.

According to a June 7 fact sheet by the Congressional Research Service, 48 states and the District of Columbia had passed legislation recognizing Juneteenth as a holiday or observance, and Hawaii’s governor signed into law a bill to observe Juneteenth after the fact sheet was published. South Dakota is the only state without an official observance of Juneteenth, according to CRS.

Stock and bond markets will remain open on Friday. The New York Stock Exchange and Nasdaq will decide in coordination with the financial industry on whether to close for Juneteenth in 2022, representatives of the exchanges said.

Stock exchanges generally coordinate on holiday closures and plan them well in advance. Currently, exchanges close for many federal holidays but remain open for some, such as Columbus Day and Veterans Day. Bond markets are closed on those holidays.

Because Juneteenth falls on Saturday, the Securities Industry and Financial Markets Association won’t recommend closing bond markets this year, the trade group said in a statement. Juneteenth will be incorporated into the holiday schedule next year, it said.

—Alexander Osipovich and Sebastian Pellejero contributed to this article.

Write to Catherine Lucey at catherine.lucey@wsj.com and Lindsay Wise at lindsay.wise@wsj.com

QR codes track you, but they are here to stay, Tech News News & Top Stories

SAN FRANCISCO (NYTIMES) - When people enter Teeth, a bar in San Francisco, the bouncer gives them options. They can order food and drinks at the bar,...
Read more
Tech

Why is the commercial cloud key to a digital government?, Tech News News & Top Stories

SINGAPORE - The pressure of using commercial cloud technologies has never been so intense for governments until the Covid-19 pandemic hit.Commercial cloud services -...
Read more
Tech

For the first time in the history of the Olympics, athletes are climbing their way to the podium — quite literally. Sport climbing is making...
Read more
Sports

It has been nearly a century since a Canadian won a gold medal at the Olympics in the 200-metre race, but hours after Andre...
Read more