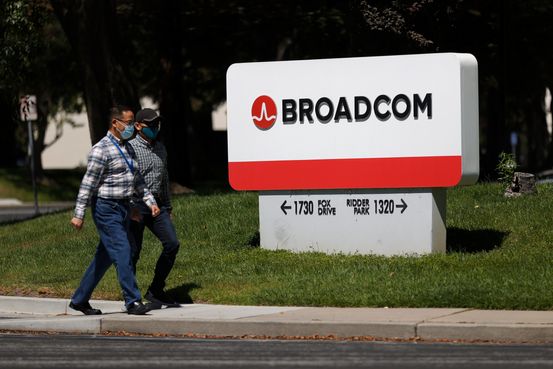 is in talks to buy SAS Institute Inc., according to people familiar with the matter, in the latest move by the acquisitive technology giant to beef up in the corporate-software market.

A deal, which would value closely held SAS in the range of $15 billion to $20 billion, could be finalized in the coming weeks, assuming the talks don’t fall apart, the people said. That number is so-called enterprise value, some of the people said, which typically includes assumed debt and is adjusted for cash on the target’s balance sheet.

Broadcom has a market value of nearly $200 billion after its shares have risen around 50% over the past year.

Broadcom, a semiconductor powerhouse built largely through acquisitions, has been on the hunt for more deals since former President

blocked its quest to buy rival

in 2018, citing security risks. Broadcom has since moved its headquarters from Singapore to the U.S.

has been focused on diversifying beyond the company’s core chip business and pushing into the lucrative software arena. In 2018, he struck a roughly $19 billion deal to buy software firm CA Technologies, formerly Computer Associates. The following year, Broadcom agreed to buy

Major news in the world of deals and deal-makers.

Cary, N.C.-based SAS sells analytics-, business-intelligence and data-management software. It traces its roots back to the 1960s, when universities teamed up to analyze troves of agricultural data through a program called the Statistical Analysis System, according to its website. Incorporated in 1976, the company now has over 12,000 employees and customers around the world. It is still run by co-founders

Big technology firms have been laser-focused on expanding software businesses, with

earlier this year agreeing to pay $16 billion for

Broadcom’s big push into software with the purchase of CA Technologies took investors and competitors by surprise, given its longtime focus on semiconductors. In the years since, Broadcom has added to its enterprise-software offerings to appeal to business customers and compete with the likes of Microsoft. The CA acquisition has been viewed as a success, with software now accounting for roughly 28% of Broadcom’s revenue.

said the company is committed to allocating 50% of its free cash flow to shareholders, M&A, buybacks and debt repayment, before adding, “There isn’t anything yet on the M&A front that I can talk about.” Earlier in the year, Mr. Tan had said Broadcom would look at buybacks and perhaps debt repayment if it didn’t make an acquisition by the end of the fiscal year, which typically ends in October or November.

The latest potential deal comes as large mergers-and-acquisitions activity has been thrown into question, especially in the technology sector, as executives and deal makers monitor the Biden administration’s plans to curb industry consolidation and be tougher on tech giants.

Mr. Biden’s executive order last week encouraged regulatory agencies such as the Federal Trade Commission to adopt new rules and policies to rein in the growing size and power of large tech platforms such as

That could leave an opening for other technology firms to do deals while the largest potential buyers are under scrutiny. But the FTC, chaired by Democrat Lina Khan, also voted to broaden its mandate to pursue cases beyond the current standard of whether practices cause harm to consumers, which expands the universe of deals it could examine.

Another big family-owned company, Medline Industries Inc., agreed in June to sell itself to a group of buyout firms for $34 billion including debt. It was the largest leveraged buyout since the 2007-08 crisis and some advisers expect more private company sales to follow.

Appeared in the July 13, 2021, print edition as ‘Broadcom in Talks to Acquire Software Firm SAS Institute.’