For Ever Given, Ship That Blocked Suez, It Could Soon Be Anchors Aweigh 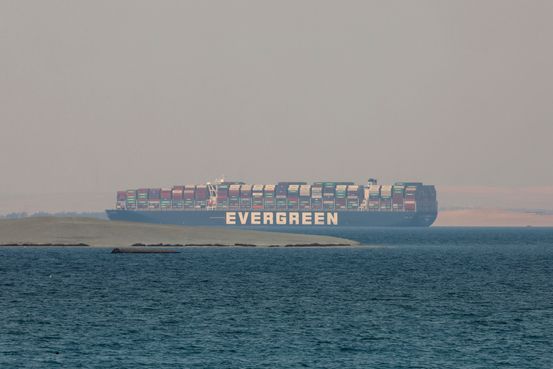 The owner and insurers of the Ever Given, the container ship that blocked the Suez Canal for days, disrupting global shipping, reached a preliminary deal with the Suez Canal Authority to release the vessel, according to the U.K. insurance group helping lead negotiations.

The U.K.’s P&I Club said an agreement in principle had been reached that should allow the vessel to sail. It said it was working with the owner of the Ever Given, other insurance companies and the SCA to finalize a deal. “Once the formalities have been dealt with, arrangements for the release of the vessel will be made,” it said.

The ship could be allowed to continue its journey as early as the next few days, according to people familiar with the matter.

The container ship blocked the Suez Canal for nearly a week in March before being dislodged from the banks of the canal. The SCA had demanded compensation for damage to the canal before it would allow the ship to resume its voyage. The insurer, in its statement Wednesday, didn’t specify the terms of the preliminary agreement.

chairman of the SCA, told state-run television in April that the agency was demanding payment for the costs of the rescue operation, damages to the banks of the canal and lost revenues. An Egyptian court ordered the seizure of the ship, claiming about $900 million in compensation.

On Wednesday, Mr. Rabie said the agency reached a settlement.

“We are satisfied with the compensation value as it preserves our rights and compensates for the rescue costs as well as enables us to maintain a friendly relationship with the other party,” he told state media

The preliminary deal announced Wednesday calls for about $200 million in compensation, according to people familiar with it. Spokespeople for the ship’s charterer, Taiwan’s

The Ever Given hit the bank of the canal and became lodged lengthwise across the crucial waterway, blocking passage from both directions. A global shipping traffic jam ensued, with vessels anchoring on either side of the waterway as they waited for it to be cleared. Other ships rerouted around the canal.

The blockage added to a series of events that have wreaked havoc on the world’s supply lines. A global chip shortage has beleaguered the auto industry. A cold snap in Texas hit plastics production. Containers, the metal boxes in which shippers pack goods for transport by sea, were already in short supply before the Ever Given scrambled the careful choreography that goes into making sure those boxes get to where they need to be.

The Ever Given is laden with goods that are now months late. Roderick de la Houssaye, owner of Rotterdam-based logistics service company Nedcargo International BV, said one of his containers on board contains merchandise, like hats and T-shirts, for a Formula One race in Portugal. That event was in early May.

“They are now worthless,” he said. Mr. de la Houssaye said his clients have over $1 million worth of goods on the Ever Given, including children’s swimwear and other summer clothing destined for the Netherlands. Even if the ship is cleared within days to resume its voyage, that stock will miss the selling season and need to be sold at a discount, he said.

Jan Unander, chief executive of Swedish automotive supplier UNIC AB, also has goods aboard the ship. He thought he had found a solution to replace deliveries that were stuck on the Ever Given. He found a ship from the southern Chinese city of Shenzhen, one of the world’s busiest ports, that could take his Chinese-made parts. But the city’s container port was recently hit by a Covid-19 outbreak among dockworkers. That brought traffic to a virtual standstill. Mr. Unander was forced to redirect his goods to Ningbo, another Chinese port. “I hope to finally ship them next week,” he said.

—Summer Said and Costas Paris contributed to this article.

Write to Benoit Faucon at benoit.faucon@wsj.com

Appeared in the June 24, 2021, print edition as ‘Deal Reached to Release Suez-Blocking Ship.’