Are Covid Vaccines Riskier Than Advertised?

G-7 Tax Plan: What We Know About the Global Corporate Tax Deal 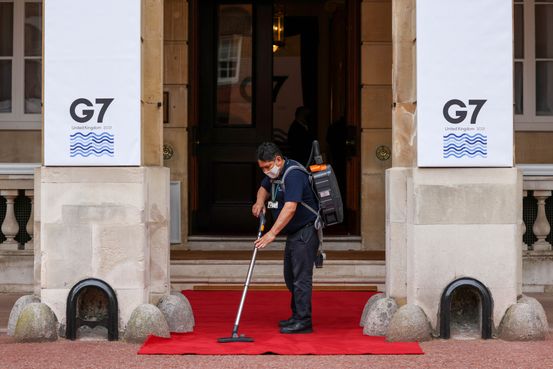 Seven wealthy countries have announced a plan to impose a minimum levy on multinational corporations and rewrite the rules governing how countries tax them, but policy makers around the world will need to make some tough choices before anything actually changes.

The Group of Seven nations agreed to a broad framework for changing the global corporate-tax system, rather than a detailed plan. It pairs two related but distinct “pillars.”

There are high political and bureaucratic hurdles to adoption of the proposal. Here is a look at some of the factors that will shape any global corporate tax regime.

1. One major part of the proposal would upend a longstanding principle of international taxation.

That principle said corporate profits should be taxed where value is generated, which traditionally was where businesses had a physical presence. The rule was easier to follow when profit flowed from factory floors instead of patents and other highly mobile intellectual property.

Now the G-7, which comprises of Canada, France, Germany, Italy, Japan, the U.K. and the U.S., is proposing that some profit from some of the biggest companies should be reallocated to countries where their products and services are consumed. Those countries can then tax the reallocated portion of the profit.

Under the proposal, nations where the companies’ products are consumed would have the right to tax 20% of profits above a margin of 10%. So imagine a company with $100 in revenue made $20 of profit, for a 20% margin. Countries where the company does business would likely share taxing rights over $2 of the additional $10 of profit, regardless of where that profit would have been taxed under the current system. The remaining $8 would likely continue to be taxed as before.

Only the largest and most profitable companies would be affected under the proposal, at most around 100. The 100 biggest companies by market capitalization have recently included such giants as

data from S&P Global Intelligence show. However, measures other than market cap could be used to identify the biggest companies, and lobbyists say they expect some sectors to be excluded from the list.

2. A second part would impose a new 15% minimum tax on the global income of multinational companies.

This second pillar of the proposal relies on each country passing laws to ensure that companies headquartered there pay a minimum tax of at least 15% in each of the nations in which they operate. Companies that paid less would make up the difference to their home countries.

If adopted widely, such a rule could reduce the incentive for companies to set up subsidiaries in tax havens.

In each of the past five calendar years, between two dozen and three dozen companies reported effective tax rates of less than 15% among the 100 biggest companies by market capitalization, according to data from S&P Global Market Intelligence.

3. Tech companies are supporting the deal, even though some might have to pay more taxes.

The G-7 deal likely would mean higher overall tax bills for many of the biggest tech companies, with more of the payments potentially going to countries in Europe, and less to the U.S.

There would be a silver lining for the tech firms: The removal of digital-services taxes that have been applied to big tech companies in the past couple of years in several European countries, including France, Italy and the U.K. The G-7 committed to the coordinated removal of such taxes as part of its deal.

Tech companies are willing to trade slightly higher taxes for an unwinding of that growing patchwork of national taxes targeting their digital services.

Governments have crafted their digital-services taxes to cover only specific services, like digital advertising, from companies that meet minimum revenue criteria. This has led some big U.S. tech companies and their lobbyists to argue they are discriminatory and unpredictable.

Some tech advocates worry the global tax overhaul will get implemented and countries will figure out ways to keep their digital-services taxes on the books.

4. The 15% minimum tax rate is unlikely to be seismic on its own.

Everything depends on how policy makers apply that minimum—and what the tax base is. Countries can set a 15% minimum tax, but that doesn’t answer a fundamental question: 15% of what?

Apple reported an effective global tax rate of 14.4% on financial-statement profits for the year ended Sept. 26, 2020, citing the effect of earnings in countries with lower tax rates. In the five prior years, Apple reported tax rates between about 16% and 26%, S&P data show. Facebook reported a 12.2% effective tax rate for the year ended Dec. 30, 2020, but it was 25.5% in 2019 because of a court decision.

A Facebook spokesman said that looking over the past 10 years, the company has paid an effective tax rate of 20.71%. Reported tax rates on financial statements don’t always line up with those reported on confidential tax forms.

Assuming a 15% base rate prevails, everything would depend on how each country implements it, said Friedemann Thomma, international tax chair for law firm Venable LLP. Smaller countries especially will have every incentive to find ways to keep their tax codes hospitable.

“In my mind, this proposal is not revolutionary, does not change our thinking for multinationals, and I don’t think it will move the needle with regard to the effective tax rate of global companies,” Mr. Thomma said. “It will all depend on the ultimate implementation of that broad principle.”

5. The proposal is designed to target the largest and most profitable companies. But how that gets defined is complicated.

The reallocation of profits to places where products are consumed will only apply to the roughly 100 largest companies with profit margins over 10%— with some industries like agriculture, banking and the oil industry potentially carved out in part because their income isn’t as mobile.

It isn’t clear how the 10%-margin rule would be applied.

has a profit margin below that level, but officials and lobbyists have said they expect at least some of the company’s profit—likely at its profitable cloud division, Amazon Web Services—to be subject to the new reallocations. One way to do that: apply the rule to each business unit rather than parent companies.

An Amazon spokesman said the company supports the “process that creates a multilateral solution” because it “will help bring stability to the international tax system.”

Write to Sam Schechner at sam.schechner@wsj.com, Richard Rubin at richard.rubin@wsj.com and Theo Francis at theo.francis@wsj.com