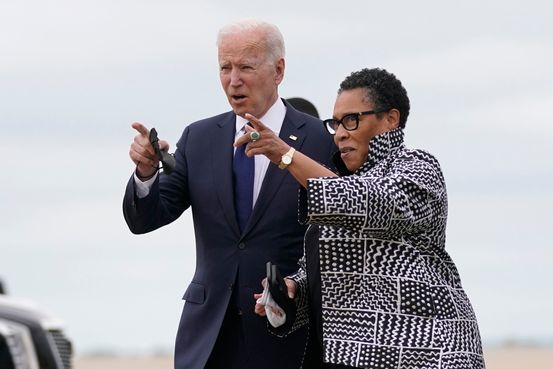 WASHINGTON—The Federal Housing Administration is relaxing the way it assesses student-loan debt when weighing eligibility for homebuying assistance as the Biden administration pushes to help lower-income borrowers and narrow a racial gap in homeownership.

The changes, which were presented in a letter to lenders late Thursday, are intended to allow more borrowers to qualify for loans backed by the FHA, a unit of the Department of Housing and Urban Development that provides insurance on mortgages to first-time and lower-income home buyers.

Prospective home buyers who qualify for FHA help typically have lower credit scores than individuals with other government-backed loans—such as those guaranteed by Fannie Mae and Freddie Mac—and they are disproportionately Black and Hispanic, according to data collected by federal regulators. The surge in student debt over the past two decades has coincided with historically low homeownership rates among younger households. Some researchers say the phenomena are linked.

Relaxing the way it factors in student debt will bring the FHA more in line with other government-backed mortgage programs, such as Fannie and Freddie, which also eased their criteria in recent years. The Biden administration is proposing more down-payment assistance for Black homeownership and taking a number of other measures to fulfill a pledge to address racial equity in housing.

“This new policy will make a big difference for individuals throughout our nation and is another step in our mandate to promote equity and opportunity for homeownership,” said HUD Secretary

in a statement. Ms. Fudge is expected to discuss the changes at a Black homeownership event in Cleveland on Friday.

Before Thursday’s changes, the FHA program assumed that many borrowers were making monthly payments equal to 1% of their unpaid student-loan balances. Industry groups and consumer advocates say that method tended to inflate a borrower’s debt-to-income ratio and disqualify otherwise creditworthy borrowers from FHA loans.

Under the new policy, FHA will abandon the 1% assumption in favor of a calculation that better reflects what borrowers actually pay monthly. The changes are a victory for such groups as the Mortgage Bankers Association, which say the existing policy has imposed undue roadblocks on home buyers.

Alfreda Williams, a senior homeownership adviser at HomeFree-USA, a mortgage counselor in Riverdale, Md., said many people with solid incomes were disqualified from FHA loans because of the way their student loans are currently calculated.

“It is truly an issue now for a lot of people and especially people of color,” Ms. Williams said. Minorities, she said, disproportionately have past credit issues that can make it more difficult for them to qualify for conventional financing.

Deitric Selvage, who manages research grants and contracts for a consulting firm and who is looking for a home in suburban Maryland, is among those harmed by the way his student debt is calculated. With more than $200,000 in student debt, Mr. Selvage said he was disqualified for an FHA loan because the program assumed he pays about $2,000 a month in student-debt repayments, far more than the roughly $370 he actually pays.

Mr. Selvage, 39 years old, said he found a lender that would preapprove him for a conventional loan, but only through a process that would oblige him to forgo down-payment assistance for first-time home buyers. As a result, he would have to wipe out nearly all of his savings on a down payment.

“It would mean going into a house without any financial cushion,” he said.

How many FHA borrowers with high student-loan balances will ultimately have an easier time buying a home under the new changes isn’t clear; HUD didn’t have an estimate in its lender letter. The effects are also likely to be damped in the short run by the red-hot housing market. Many homes are getting multiple offers and selling above their list prices. FHA borrowers typically find it difficult to compete in such a frenzied market because often they are competing against cash buyers not requiring financing, whom sellers are more likely to pick.

Thursday’s changes will better factor in borrowers who have over the past decade taken advantage of expanded options for student-debt repayment that tie monthly payments to their incomes. These options, known as “income-driven” repayment, typically set monthly payments at 10% of “discretionary income”—which is based on a formula that includes adjusted gross income—and then spread payments over 20 or 25 years, depending on the size of the balance. After that time, the government cancels the remaining balance.

Should student-loan debt rules be eased to boost homeownership? Why or why not? Join the conversation below.

Enrollment in income-driven student loan repayment plans has soared as many borrowers—particularly those who attended graduate school—take on higher and higher balances.

For some borrowers, their monthly payments under the income-driven plan are too small to cover interest charges, let alone principal. HUD, an agency official said, expects its new formula to look more favorably on these lower monthly student-loan payments.

The changes should give recent graduates “burdened with significant debt loads” a better opportunity to buy a home, said David Stevens, who headed the FHA during the Obama administration.

—Josh Mitchell contributed to this article.

Write to Andrew Ackerman at andrew.ackerman@wsj.com