Is a Graduate Degree Worth the Debt? Check It Here. 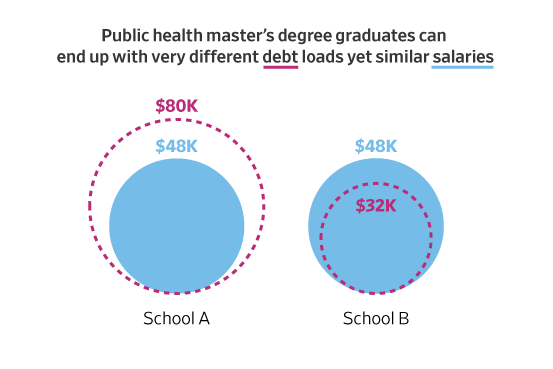 Lured by the aura of degrees from top-flight institutions, many master’s degree students have taken on debt beyond what their pay after graduation would support. This finding was detailed recently in an article published by The Wall Street Journal.

Unanswered was the question of how all the nation’s universities compare. To answer it, the Journal assembled data that allows you to look up students’ earnings after graduation, compared to their debt load, for most universities. You can use the tool to compare undergraduate degrees, as well as master’s, doctorates and professional degrees.

Here’s an example of how it works. The University of Southern California and California State University, Long Beach, both located in Los Angeles County, each offer a master’s in public health—a degree that became increasingly popular during the pandemic.

These are students’ median earnings two years after graduation at every one of 123 schools that offer a master’s in public health, according to Education Department data on federal loan borrowers.

But USC graduates left school with 2.5 times as much debt as Cal State Long Beach graduates.

In other words, USC’s debt-to-income ratio is far greater than Cal State Long Beach’s. The higher the ratio, the higher the debt is compared to the income students earn after graduation.

USC said tracking graduates after a longer period will better measure the impact of the public-health program, and that the school’s own salary figures are higher than those published by the Education Department, which come from federal tax records.

Cal State Long Beach said the school’s graduates benefit from low debt loads across the board and that their degrees lead to enhanced lifetime earnings.

The tool below compares the debt-to-income ratio of programs around the country.