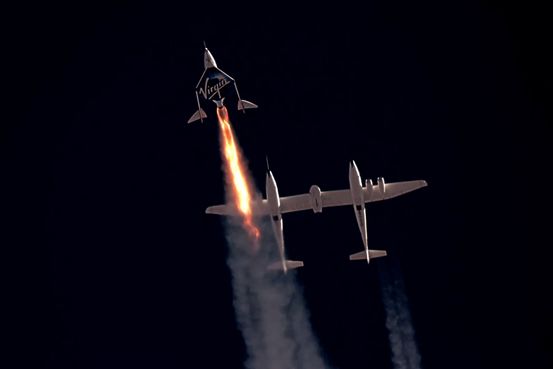 Scientists say determining the boundaries of space is fuzzy, but billionaires

have ignited the debate as they race to jump-start a space-tourism industry.

For much of the world, the boundary to space is considered the imaginary Karman Line, which starts around 62 miles above Earth and which Mr. Bezos and his Blue Origin LLC capsule is scheduled to cross on Tuesday.

The Federal Aviation Administration considers space starting 50 miles above Earth, and those that fly above that level as astronauts. Mr. Branson and the rest of his

crew received their astronaut wing badges on Sunday after passing that boundary but staying below the Karman Line.

Experts say there is little different in the passenger experience at the high points of the Blue Origin and Virgin Galactic flights, but their contrasting paths have led to a renewed examination of where space begins—an answer that differs based on whether you are approaching the question from a scientific, commercial or legal viewpoint.

“Scientists recognize that there are a lot of different ways to define the boundaries of space,” said Katherine de Kleer, a professor of astronomy and planetary science at the California Institute of Technology.

“
‘Scientists recognize that there are a lot of different ways to define the boundaries of space.’
”

Ms. de Kleer said there isn’t a consensus about where space starts among planetary scientists. She defines the boundary to space for Earth and other planets to be the base of the exosphere, which the National Aeronautics and Space Administration defines as the outermost layer of the atmosphere. However, she said, applying that definition to Earth, where the base of the exosphere is around 435 miles high, would mean the Hubble Space Telescope and International Space Station are still in Earth’s atmosphere. Hubble and the space station orbit at roughly 340 miles and 250 miles above Earth, respectively.

The Karman Line is the internationally recognized boundary to space set by the Fédération Aéronautique Internationale, an international aeronautics record-keeping body. Theodore von Karman, an engineer and mathematician, in the 1950s calculated the altitude at which lift from the air can no longer keep winged craft aloft.

A practical way to consider where space begins is by considering the type of vehicle needed to fly, said Alyssa Goodman, a professor of applied astronomy at Harvard University. Airplanes can fly in the Earth’s atmosphere because the air pressure provides lift to the aircraft’s wings. However, to get to space, a spacecraft needs propulsion to get past the Karman Line.

Blue Origin has boasted in tweets that its New Shepard spacecraft “was designed to fly above the Kármán line so none of our astronauts have an asterisk next to their name.” Mr. Bezos’ company has said that going above the line makes for a different experience.

Gregory Chamitoff, a professor of aerospace engineering at Texas A&M University and a former NASA astronaut, said people won’t be able to tell the difference between being 50 miles and 62 miles above Earth. On both trips, passengers experience a few minutes of weightlessness.

As for whether Virgin passengers should get an asterisk for not passing the Karman Line, Mr. Chamitoff said, “That’s kind of silly.”

Mr. Branson said his Virgin Galactic experience Sunday “was beyond my wildest dreams” and that he took notes to enhance the trip for the company’s future passengers. “The only way you sometimes can find these little things is to get in a spaceship and go to space and experience it,” he said after landing on Sunday.

The view of Earth isn’t much different at those levels, Ms. Goodman said. Neither set of passengers will be high enough to see the Earth as a sphere, but they will still see a black sky and the Earth’s curvature, she said.

The biggest difference will be in the passengers’ experiences during takeoff and landing, Mr. Chamitoff said. Virgin Galactic’s passengers are in a spacecraft that is carried about 8.5 miles above Earth by a mother ship before being dropped and rocketing into space. After a few minutes at the edge of space, the spacecraft glides back to Earth unpowered. Other than when the spacecraft rockets into space, the experience is likely similar to being in an airplane, Mr. Chamitoff said.

How do you think private-enterprise missions will affect the future of space exploration? Join the conversation below.

On the other hand, Blue Origin’s passengers are in a capsule on top of a rocket and will experience more acceleration at takeoff, Mr. Chamitoff said. Passengers then return to Earth in the capsule under parachutes, which could lead to a bumpier landing, he said.

Defining space also has legal and political implications. Countries concerned about national sovereignty want space to be higher so they can claim more airspace, said Michael Kezirian, a professor of astronautics practice at the University of Southern California and fellow of the International Association for the Advancement of Space Safety.

The IAASS has advocated for considering three zones rather than just aerospace and outer space, with the middle zone, which it calls Near Space, being subject to a different set of rules than air or space travel. The organization considers Near Space to be from around 11 miles to around 99 miles above sea level. Near Space includes suborbital flight.

The Outer Space Treaty of 1967 states that all countries are free to explore outer space with no nation able to stake a claim. There are no rules governing how high a spacecraft can go. Getting consensus treaties approved to define where space is has been difficult because of the uncertainty of the future of space travel, Mr. Kezirian said.

“You just don’t know what in 20 years the use of space will be and what the law should be,” he said.