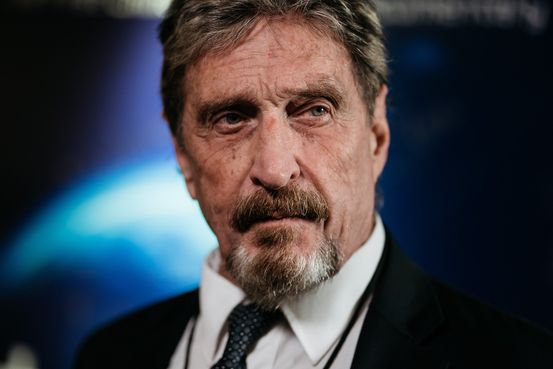 Spanish authorities opened an investigation into the death of software pioneer

after he was found dead in his jail cell from an apparent suicide.

His body was found Wednesday at a facility near Barcelona, a day after a Spanish court ordered his extradition in connection with a federal criminal proceeding in Tennessee. Mr. McAfee, the 75-year-old founder of antivirus software company

, had been detained in Spain since October in connection with criminal charges filed by the Justice Department’s tax division.

“Everything indicates that it could be a death by suicide,” a spokeswoman for the Justice Department of the Catalan regional government told The Wall Street Journal on Thursday.

The spokeswoman said that a local judicial delegation is investigating the cause and circumstances of Mr. McAfee’s death and took his body away from the jail to carry out an autopsy. The Manhattan U.S. attorney’s office on Thursday said it was requesting from Spain a certificate of death or other proof of Mr. McAfee’s death, as well as information about the cause of his death, according to a New York federal court filing.

Mr. McAfee’s body was found in his cell at around 7 p.m. local time. Security personnel tried to resuscitate him, but the jail’s medical team later declared him dead, the spokeswoman said.

Mr. McAfee shared the cell with another man, but he was alone when he was found, she said. The spokeswoman said she couldn’t comment further.

His Spanish lawyer, Javier Villalba, said the director of the prison where Mr. McAfee was detained told him on Wednesday that his client was found hanging. He said that he wasn’t given more information about the circumstances and that he was waiting for the results of the investigation being carried out by Spanish authorities.

The spokeswoman of the Justice Department of the Catalan government declined to comment on Mr. Villalba’s remarks. The director of the prison couldn’t be reached to comment.

A spokeswoman for the High Court of Justice of Catalonia in Barcelona, which is handling the investigation on Mr. McAfee’s death, said she couldn’t confirm the cause of his death until the results of his autopsy were published. That could take several days, she said.

“He has never given any signal he could have taken his own life,” Mr. Villalba told the Journal. “It’s an unpleasant surprise, something we couldn’t expect at all. We don’t understand it.”

Nishay K. Sanan, an attorney representing Mr. McAfee in U.S. criminal proceedings, said Mr. McAfee “was and will always be remembered as a fighter.”

“He tried to love this country but the U.S. government made his existence impossible,” Mr. Sanan said.

Mr. McAfee took a long and circuitous route to Spain. He lived in Belize for years, leaving in 2012 when authorities there wanted to question him in connection with the suspected homicide of his neighbor, Gregory Faull, who was found with a gunshot wound to the head. Mr. McAfee, who said he was afraid of being set up, asserted his innocence and fled to Guatemala.

He was later arrested for illegally entering Guatemala and deported to the U.S., where he pursued his interest in libertarian politics, briefly seeking the nomination of the Libertarian Party as its candidate for the 2016 and 2020 presidential elections.

In 2019, Mr. McAfee announced he would continue his campaign in exile, as he put it, after saying he ran afoul of U.S. tax authorities.

“I’ve not paid taxes for eight years. I make no secret of it. I have not filed returns. Every year I tell the IRS ‘I am not filing a return, I have no intention of doing so, come and find me,’” he said in a video he posted to

In recent years, Mr. McAffee became closely associated with cryptocurrencies, including projects that, according to law enforcement authorities, raised money from the public and used some of the proceeds to pay him for his promotion work. At the time of his death, he was facing criminal charges on tax evasion, securities fraud and money laundering, among others.

The tax-evasion charges allege that Mr. McAfee didn’t file tax returns from 2014 to 2018 despite earning millions of dollars from promoting cryptocurrencies, public speaking, consulting work and selling the rights to his life story for a documentary. Prosecutors said Mr. McAfee hid income by channeling it through cryptocurrency accounts that he controlled but were opened on other people’s names.

An indictment on securities fraud and money laundering alleges that Mr. McAfee, his bodyguard and other associates manipulated cryptocurrency prices and concealed ownership of digital assets while promoting them to investors.

The Securities and Exchange Commission and the Commodity Futures Trading Commission had also sued Mr. McAfee for fraud in federal civil court, alleging he had earned as much as $23 million touting cryptocurrencies while illegally hiding his own compensation.

After his arrest in Spain in October, Mr. McAfee filed a request to Spanish judicial authorities to be freed while waiting for a decision on his extradition to the U.S.

However, in December, a court rejected his request, saying that he was a flight risk and that remaining in the jail near Barcelona didn’t pose a risk to his health.

During a court hearing about his extradition, Mr. McAfee said that the charges against him had a political motive and that if he was sent to the U.S. he would spend the rest of his life in prison. The Spanish court dismissed his claims due to a lack of evidence.

—Dave Michaels contributed to this article.

ROTTERDAM, Netherlands—The Ever Given, the container ship that blocked the Suez Canal for days and...
Read more
Related news
News