Powell Expects Inflation to Moderate, but Will Likely Remain Elevated This Year 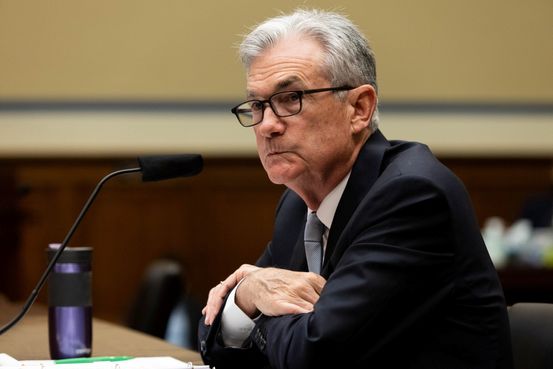 said inflation had increased notably and would likely remain elevated in the coming months before moderating.

Pandemic-related bottlenecks and other supply constraints have led to rapid price increases for certain goods and services “which should partially reverse as the effects of the bottlenecks unwind,” Mr. Powell said in imony prepared for delivery later Wednesday before the House Financial Services Committee.

U.S. consumer prices continued to accelerate in June at the fastest pace in 13 years as the recovery from the pandemic gained steam. The Labor Department reported Tuesday that its consumer-price index increased 5.4% in June from a year earlier. Excluding volatile food and energy categories, prices rose 4.5% from a year earlier, the most in 30 years.

While the Fed and many private sector forecasters had expected inflation to rise this year as a surge in consumer spending collided with pandemic-related shortages and bottlenecks, the strength of the last three monthly inflation readings has been greater than many anticipated. While inflation is expected to decline, questions abound over how soon and how low inflation will fall relative to the Fed’s 2% target.

Since the coronavirus pandemic hit the U.S. economy in March 2020, the Fed has set interest rates near zero. It has said it expects to keep rates there until it is confident inflation will hold at its 2% target and the labor market has healed, or returned to what it calls “maximum employment.”

The central bank is also buying $120 billion a month in Treasury and mortgage securities to hold down long-term rates, and it has committed to continue those purchases until achieving “substantial further progress” toward its inflation and employment goals.

Mr. Powell said the economy “is still a ways off” from reaching that standard, but that officials expect progress to continue.

Fed officials are set to ramp up their discussions over how and when to reduce bond purchases at their meeting in two weeks, but decisions aren’t imminent. Mr. Powell said the Fed would continue their discussions “in coming meetings.” Several Fed bank presidents have indicated they are eager to start shrinking, or “tapering,” the pace of those purchases. Other senior Fed officials have suggested the central bank shouldn’t be in a rush.

What is your outlook on the economy for the next quarter? Join the conversation below.

Investors and Fed officials are grappling not only with an unexpected blast of price pressures but also with implementing a new policy framework, unveiled in August 2020, designed to seek periods of inflation moderately above 2% after periods below that level. Officials have been vague around exactly what would be an acceptable period or magnitude of above-target inflation.

At last month’s meeting, 13 of 18 officials projected they would need to raise interest rates from near zero by 2023, with most expecting to raise their benchmark rate by 0.5 percentage point. Seven expected to raise rates next year. The projections surprised many investors because in March, most officials expected to hold rates steady through 2023.

The projections, along with comments from Mr. Powell after the meeting, suggested more officials thought inflation pressures might prove more stubborn than initially anticipated and wanted to guard against that risk by penciling in earlier rate increases. The Fed often changes its policy outlook in response to changes in the balance of risks to growth or increased uncertainty around the most likely outcomes.

Some investors thought that any policy pivot risked undercutting the Fed’s new framework and its tolerance for temporarily higher inflation.

“The question we face with this inflation has nothing to do with our framework,” Mr. Powell said at a news conference last month. The Fed’s framework indicated officials wouldn’t raise interest rates simply because unemployment fell to low levels to pre-empt anticipated inflationary pressures, as the central bank did during the previous expansion. “That is not at all the current situation. We have many millions of people who are unemployed, and we have inflation running well above our target,” he said.

For months, Mr. Powell had used pre-pandemic employment levels as a guide for what might meet a working definition of “maximum employment.” But the Fed’s monetary policy report, released last Friday, suggested officials might be growing less confident about the possibility of returning to the labor market conditions of February 2020 without accepting higher inflation.

The Fed flagged the risk that the pandemic had left “long-lasting effects on the structure of the labor market,” including by accelerating the adoption of new technologies or the pace of worker retirements. “The post-pandemic labor market and the characteristics of maximum employment may well be different from those of early 2020,” the report said.

Because many Fed officials are likely to have concluded that their inflation goals have been met, their analysis of what constitutes “maximum employment” could be the deciding factor in determining when to raise rates.

Write to Nick Timiraos at nick.timiraos@wsj.com

SINGAPORE—China moved to contain the fallout from a regulatory assault on technology companies that has...
Read more
Related news
Sports

SINGAPORE—China moved to contain the fallout from a regulatory assault on technology companies that has...
Read more

SINGAPORE—China moved to contain the fallout from a regulatory assault on technology companies that has...
Read more