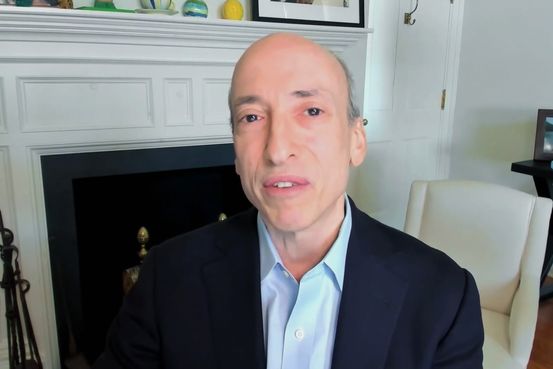 outlined a broad examination of market structure, including the role high-speed traders play in executing many small investors’ orders and the rise of online brokers, whose technology can entice people to do more trading.

Mr. Gensler, who took over the SEC in April, renewed his criticism of the system that sends many of the orders placed by individual investors to be filled by high-speed traders known as wholesalers, including Citadel Securities and

instead of routing them to public exchanges.

That system, known as payment for order flow, benefits individual investors who are simply seeking to trade at the prevailing market price set at exchanges, according to brokerage firms. Wholesalers can offer such investors slightly better prices because their orders are small and don’t move the market.

Brokers say payment for order flow is a form of customer segmentation, similar to how wireless companies tailor cellphone prices and contracts to customers’ needs and willingness to pay. Mr. Gensler suggested that individual investors might get better prices if more trading were done on public exchanges. Only about 53% of all trading in January was done on exchanges, while the rest involved wholesalers and broker-run trading venues known as dark pools, Mr. Gensler said.

“The question is whether our equity markets are as efficient as they could be, in light of the technological changes and recent developments,” Mr. Gensler told the Piper Sandler Global Exchange and FinTech conference.

Brokers, traders and some academics have said U.S. investors benefit from the current system, citing data showing that firms such as Citadel Securities and Virtu collectively save individual investors billions of dollars a year. Payment for order flow has also made it possible for brokerages such as Robinhood Markets Inc. to offer zero-commission trading.

Still, the growing share of trades being executed outside of public exchanges—in part because of the groundswell of individual-trading activity—has raised concerns about transparency.

While public exchanges disclose their bids and offers and then compile the orders to publish a national best bid and offer for every stock, wholesalers and so-called dark pools don’t reveal their pre-trade prices. Those off-exchange venues have to execute trades at prices at least as good as the national best price, which comes from the exchanges.

But the national best bid and offer, known as the NBBO, might be a substandard benchmark, Mr. Gensler said, because so many trades happen away from the exchanges. Even some exchange orders aren’t included in the national best price, such as those in odd-lot sizes, in which fewer than 100 shares change hands.

“I believe there are signs…that the NBBO is not a complete enough representation of the market,” Mr. Gensler said.

A pre-markets primer packed with news, trends and ideas. Plus, up-to-the-minute market data.

The SEC will consider revising how the benchmark is calculated, Mr. Gensler said. The agency will examine other potential rule changes related to how exchanges and brokers price shares, he said.

Shares of Virtu dropped 7.7% after Mr. Gensler’s speech. Virtu handles between 25% and 30% of individual investors’ order flow in U.S. stocks, and its stock has rallied this year during the meme-stock frenzy. Citadel Securities, the only wholesaler with a larger market share, isn’t publicly traded.

said in an interview that individual investors benefit from having their trades executed by wholesalers and would be harmed if U.S. regulators required their orders to be sent to exchanges. Mr. Cifu voiced confidence that Mr. Gensler and his staff would come to the same conclusion.

“I’m very confident that when they look at this and look at the data, they’re going to be like, ‘This is a pretty good system,’” he said.

A Citadel Securities spokesman declined to comment. Robinhood said in a statement that it was looking forward to engaging with the SEC on its review of market structure.

Firms such as Virtu and Citadel Securities benefit from their ability to execute orders at prices that include fractions of a cent per share, while exchanges generally aren’t allowed to execute trades or display quotes at prices of less than a penny. That might give wholesalers an advantage when competing for orders, Mr. Gensler said.

The agency will consider changes to rules governing the minimum price increments on exchanges, he added.

The SEC’s scrutiny of payment for order flow and other elements of the stock market’s plumbing followed Mr. Gensler’s nomination to run the agency and the tumult in stocks such as AMC and GameStop.

Individual investors, many of them younger, have been drawn to stocks popular on websites and social-media forums. AMC soared 83% last week, leading to higher interest in call options, contracts that allow investors to make their bullish bets with less money up front.

Democrats, who have narrow majorities in Congress, have held hearings and expressed unease with what they view as a casino-like mentality among some small investors. Progressive lawmakers pointed blame at brokerage firms and wholesalers, saying the industry is enabling too much speculation.

Any SEC rule changes would first be issued as proposals, making it possible for investors and other market participants to comment on them. Mr. Gensler didn’t say when the agency would issue a proposal, but said, “It should not be confused with something that is far off.”

Exchanges also use incentives, known as rebates, to attract orders from brokers. The SEC tried to force the exchanges to experiment with limiting rebates, but a federal appeals court ruled last year that regulators didn’t have the authority to mandate the planned pilot program. The regulator will consider changes to that pricing system as well, Mr. Gensler said.

“Both types of payment for order flow raise questions about whether investors are getting best execution,” Mr. Gensler said. He noted that brokers are banned from paying for order flow in the United Kingdom, Canada and Australia.

Write to Dave Michaels at dave.michaels@wsj.com and Alexander Osipovich at alexander.osipovich@dowjones.com