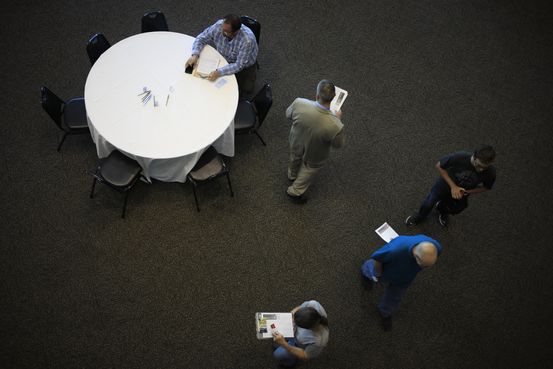 Jobless claims rose last week to a level last recorded in early June, showing the unevenness in the labor market’s recovery, while the number of people receiving benefits fell sharply at the start of the month.

Initial jobless claims, a proxy for layoffs, rose by 51,000 to a seasonally adjusted 419,000 for the week ended July 17, the Labor Department said Thursday. The four-week moving average, which smooths out volatility in the weekly figures, slightly increased to 385,250. The increase returned the level of claims to near levels recorded in early June.

The total number paid benefits under all programs, including those created in response to the pandemic, fell by more than 1 million in early July, as many states acted to end such aid.

Continuing unemployment payments through regular state programs decreased by 29,000 to 3,236,000 for the week ended July 10, the lowest level since March 2020. The declining number of people receiving unemployment benefits likely reflects both an improving economy and the fact that about half of the states have ended enhanced benefits that paid recipients an additional $300 a week on top of state payments.

The latest jobless claims figures show the recovery remains uneven. However, with job gains and consumer spending at high levels—along with more Americans getting fully vaccinated—the economy has expanded robustly so far in 2021 and that is expected to continue into next year. The Delta variant of Covid-19, which has become the primary cause of illness tied to the virus, isn’t expected to jeopardize the U.S. economic recovery.

U.S. employers added 850,000 jobs in June, the largest gain in 10 months, and workers wages rose briskly, more signs of a strengthening labor market. Economists surveyed in July expected employers to add an average of nearly 500,000 jobs a month over the next year, which would be a historically fast pace of employment gains.

The number of Americans receiving unemployment benefits has been declining in recent weeks. About half of states have acted to end enhanced and extended unemployment benefits early. Under those pandemic programs, recipients are paid $300 a week on top of state benefits and allowed to receive payments for longer than the six months or less most states allow.

Many Republicans and some economists say the benefits provide a disincentive to taking lower-wage jobs. Many Democrats and other economists say the payments were a lifeline for workers laid off during the pandemic and helped stabilize the economy.

Colorado is among the states retaining enhanced benefits until September, when they are due to expire nationwide.

Guard and Grace, a steakhouse in downtown Denver, is experiencing a resurgence in business as diners venture out and tourism picks up, said general manager Jeff Stoltman. But the restaurant is struggling to find workers to meet that demand, and as a result is keeping its dining room closed for lunch service.

“It’s a slower process than it ever has been to find workers,” said Mr. Stoltman. “People apply but don’t show up for interviews. Maybe they’re finding employment elsewhere, but it could also be their meeting job-search requirements but don’t really want a job.”

Most states require unemployment recipients to demonstrate that they are actively searching for a job.

Mr. Stoltman said as benefits run out and more people are comfortable working in-person jobs, he hopes the pool of applicants will increase. But he said other factors are contributing, including that restaurant-industry veterans have left for other jobs.

Applicants could also be in short supply because potential workers might not be able to find a job that matches their skill set, experience or location. That could lead to relatively high unemployment coupled with record job openings, economists say. The unemployment rate rose slightly to 5.9% in June and remains well above the 50-year low of 3.5% touched just before the pandemic took hold in 2020. Some employers have already begun to adapt to this permanently smaller workforce through automation and other labor-saving measures.

In the near future, the pace of the economy’s recovery could hinge on the Delta variant, and how the pandemic evolves. Many economists view the variant as a risk, but not a large enough one to change forecasts for robust growth in second half of the year.

Others see a greater threat that could keep Americans on the sidelines of the labor force.

“Some people might just decide to stay home with their kids because what happens is that if schools close again, mandates become more severe, or if businesses don’t reopen, people start to plan ahead,” said Belinda Román, assistant professor of economics at St. Mary’s University in San Antonio.

ROTTERDAM, Netherlands—The Ever Given, the container ship that blocked the Suez Canal for days and...
Read more
Related news
News