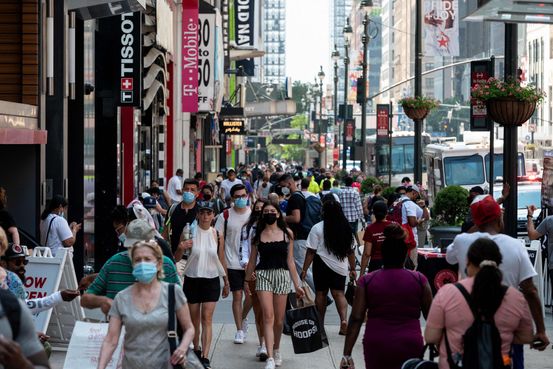 U.S. lockdowns have lifted and shopping is back.

The National Retail Federation said Wednesday it expects retail sales to jump between 10.5% and 13.5% to more than $4.44 trillion this year compared with last. That is nearly double the forecast the trade group gave in February, when it predicted between 6.5% to 8.2% growth in U.S. retail spending.

“The economy and consumer spending have proven to be much more resilient than initially forecasted,” said NRF chief executive

They have been boosted by vaccine distribution and the most recent stimulus package.

The NRF forecast includes purchases made both online and in stores. It excludes spending on restaurants, automobiles and gasoline. Last year, the NRF estimated that total retail sales hit around $4.02 trillion, with $920 billion from purchases made through online channels.

Some retailers, such as department stores and apparel retailers, struggled last year with closed stores, weak online sales or products that became less popular, such as work clothing. Others, such as big-box retailers, thrived, drawing more shoppers looking for food or homegoods.

But in recent months, most retailers reported a strong start to the year, helped by stimulus dollars and a return to categories such as clothes and beauty products as more people venture outside their homes.

In May, several retailers including

reported strong sales for the spring quarter, noting that apparel, beauty and travel products were all selling well.

“The first quarter felt like a first step towards a post-pandemic world,” said Target Chief Executive

last month. “With vaccinations rolling out across the country and consumers increasingly comfortable venturing out, we’ve seen an enthusiastic return to in-store shopping,” he said.

Write to Sarah Nassauer at sarah.nassauer@wsj.com