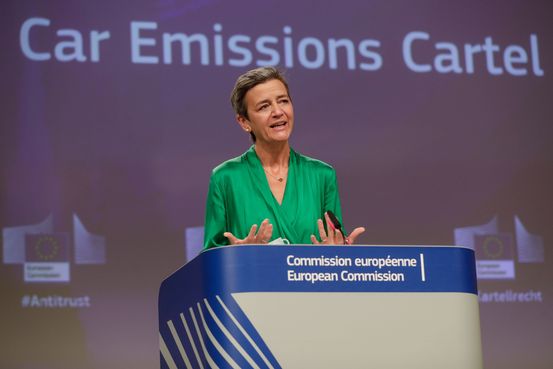 The European Commission on Thursday slapped fines totalling $1 billion on

, as well as VW’s Porsche and Audi units, after finding that the German auto makers had colluded to impede competition in diesel emissions systems.

The investigation dates back to 2019 when, in the wake of the Volkswagen diesel emissions-cheating scandal, the Commission alleged that German car makers had held technical meetings between 2009 and 2014 that violated European Union antitrust rules because the companies agreed not to compete to develop the best emissions systems for diesel-powered cars. Instead, they agreed to fulfill the minimum requirements of EU regulation.

told reporters. “Today’s case is about how legitimate cooperation has gone wrong.”

BMW said in a statement that it agreed to settle the investigation after the EU dropped additional antitrust charges. The company said the talks with other car makers were aimed at creating a customer-friendly emissions system, and said BMW never engaged in any unlawful manipulation of emissions-control systems.

Volkswagen said, “The Commission is breaking new legal ground with this decision, because it is the first time it has prosecuted technical cooperation as an antitrust violation. It is also imposing fines even though the contents of the talks were never implemented and customers were therefore never harmed.”

, maker of Mercedes-Benz vehicles, was also a member of the group of auto makers, which was known internally as the “circle of five,” but received immunity after agreeing to act as whistleblower for the Commission’s investigation. By doing so it avoided a €727 million fine, equivalent to about $857 million, the Commission said.

The Commission found that the car makers agreed to refrain from improving the technology or competing by offering SCR systems that used more AdBlue to make them cleaner. They also agreed on how large the AdBlue tanks would be and how often they would need to be refilled.

The Commission sees this case and the fine as a warning to European manufacturers that it will not tolerate collusion that impedes innovation in green technology as Brussels tightens regulations on greenhouse-gas emissions to fight global warming.

The car makers, Ms. Vestager said, “eliminated the inherent threat that their competitor would do better. This threat is a key driver of innovation. Competition and innovation in this space is also essential in Europe to meet our target for the Green Deal.”

The car makers agreed to settle the case, Ms. Vestager said, and so received a 10% reduction in their fines. BMW agreed to pay a fine of €373 million and Volkswagen agreed to pay €502 million, the Commission said.

Some critics of the Commission’s investigation have warned that it could discourage companies from collaborating on technical development, which could also restrict innovation. But Ms. Vestager said that EU law leaves ample room for legitimate cooperation.

“Our EU antitrust rules do not stand in the way of procompetitive cooperation in R&D,” she said.

The Commission plans to publish a letter with guidance for manufacturers, using this case as an example of where it draws the line between legal cooperation and the creation of a cartel.

Write to William Boston at william.boston@wsj.com