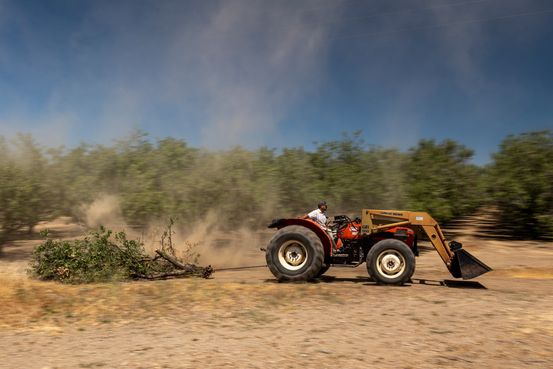 Since taking leadership of the USDA earlier this year, Mr. Vilsack has urged lawmakers to redesign farm support systems and disaster programs to help farmers cope with harsher and longer-lasting weather calamities, he said. The economic scars left by droughts and other disasters can linger for years, Mr. Vilsack said, rippling beyond farms, ranches and orchards into other sectors of the economy.

“Many of these areas have embraced a 50- to 100-year event in the last five to 10 years,” said Mr. Vilsack, speaking at the WSJ Global Food Forum on Thursday.

Farmers, ranchers and other food producers in Western states face another summer of dry conditions, with drought afflicting more than 90% of the American West, up from 43% a year ago, according to the U.S. Drought Monitor. Reservoirs are being drawn down, and some farmers are letting fields go fallow or searching for alternative water supplies.

The drought now battering U.S. agricultural producers is on pace to be one of the most severe to hit the southwestern U.S., according to federal data. The last severe drought, from 2014-2015, cost California agricultural operations about $5 billion and led to about 20,000 lost jobs, according to University of California Davis estimates.

Meteorologists have said that rising global temperatures and shifting storm patterns are leading to more frequent and deeper dry periods, and giving the land less time to reclaim moisture before the next drought sets in.

, said dry spells are a familiar risk to farmers and agribusinesses. While the current U.S. drought has helped to boost crop prices at a time of already strong demand, he said, this year’s grain harvest still could be strong.

The U.S. government last year sent a record $46 billion in direct payments to farmers to help cushion the blow from the coronavirus pandemic and international trade disputes.

“Our systems really aren’t designed for the long-term drought situation that we’re looking at in California, Utah and Arizona,” Mr. Vilsack said, adding that those states are the driest they have ever been, while Nevada is in its second-driest period.

In response, some California farmers are fallowing fields typically used for growing annual crops such as tomatoes and melons to divert scarce water supplies to permanent crops in orchards and vineyards, which require longer-term investments.

which makes products including Oikos Greek yogurt and Silk almond milk, said at the Journal event that water is a focus for Danone, which he said buys almonds from water-stressed parts of California.

“We’re working with partners to be part of the solution,” Mr. Grant said.

The effects of drought are reaching others, from consumers to investors. Anne Simpson, a managing investment director at California Public Employees’ Retirement System, said at the Journal event that the nation’s largest public pension fund is monitoring the drought’s impact. Ms. Simpson said she sees a role for Calpers in crafting public policy related to water and other topics via a seat on a California climate-change commission. She said the fund has made related investments, including in water storage.

a senior vice president focused on water and food at the World Wildlife Fund, said she hopes that over time consumers will factor water usage into decisions about what foods they eat.

“The outlook is not great, but we have choices to make about how we use the water we do have,” said Ms. Ho, speaking at the Journal event.

Write to Jesse Newman at jesse.newman@wsj.com and Jacob Bunge at jacob.bunge@wsj.com